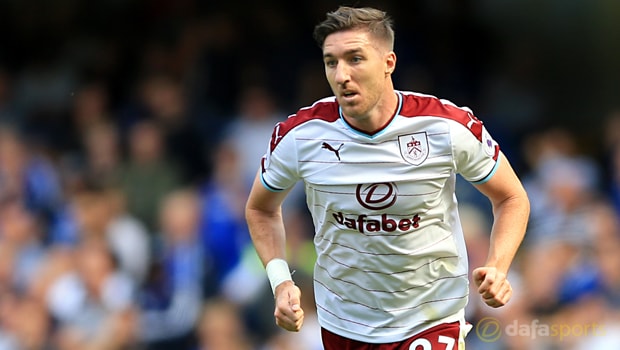 Burnley defender Stephen Ward was ‘delighted’ having signed a two-year contract extension with the Clarets on Monday.

The Republic of Ireland international defender, 31, agreed terms and signed his new deal just two days after scoring an outstanding volley as Burnley stunned Premier League champions Chelsea with a 3-2 win on the opening day of the new season at Stamford Bridge.

Ward was also named in Martin O’Neill’s provisional Republic of Ireland squad for the September World Cup qualifiers with Georgia and Serbia and he admits his new deal has capped a perfect 48 hours.

“I’m delighted to have signed,” he told the club’s website.

“It’s just great to be part of a club like this at the minute and hopefully we can have another successful season.”

Ward joined Burnley three years ago from Wolves, suffering relegation from the top flight in his first season.

They bounced straight back and last season the full-back played a key role as the club retained its Premier League status for the first time.

He has now committed to the Turf Moor club with a contract extension that will keep him there until the summer of 2019, with the option of another year.

Last season, Burnley’s success was built on their rock-solid form at home, while they tended to struggle on the road.

The new campaign could not have started better, Sean Dyche’s men racing into a three-goal lead against Chelsea as the champions suffered an early red card to Gary Cahill.

Chelsea rallied with a pair of second-half goals but their cause was further dented when Cesc Fabregas saw red for a second booking ensuring Burnley close out a famous success.

Burnley are 2.50 to win their first home game of the new season against West Brom on Saturday.