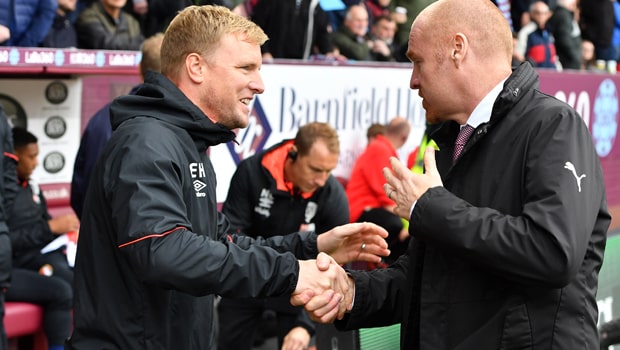 Sean Dyche felt Burnley had got “back to what they’re all about” after they defeated Bournemouth 4-0 at Turf Moor to end their poor start to the season.

The Clarets established a two-goal lead by the half-time break, with goals in quick succession from Matej Vydra and Aaron Lennon in the run up to the interval.

Bournemouth were very much in the hunt during the second half but Joe Hart in the Burnley goal was on hand to deny them a foothold in the contest when he was needed.

Substitute Ashley Barnes then scored twice in the final seven minutes to put a gloss on the win and ensure Burnley moved away from the foot of the table.

For Dyche, it was an important success but also vital that his players took on board what was drilled into them in training.

“We told the players we’ve got to get back to what we’re about and I’m pleased we’ve got that first win. It’s a start,” said Dyche.

“I was pleased with our energy and control of the game early on. We were making chances, forcing them back and being creative in different ways – they were four good goals for different reasons.”

Bournemouth had enjoyed the better of an even first half before Burnley’s goals, hitting the bar via Nathan Ake’s deflected shot.

David Brooks drew a fine stop from Hart in the second half and Cherries boss Eddie Howe understandably felt the final outcome was hard on his men.

“I don’t think it was a 4-0 performance. We were well in the game and had chances, but we didn’t take them,” he said.

“We had them penned in at 2-0 and we were one goal from changing the entire mood of the game but we never got that goal and conceded two on the break. We’re very disappointed to concede four.”

Burnley are 3.00 to win at Cardiff next weekend while Bournemouth are 2.25 to bounce back with a home win over Crystal Palace.