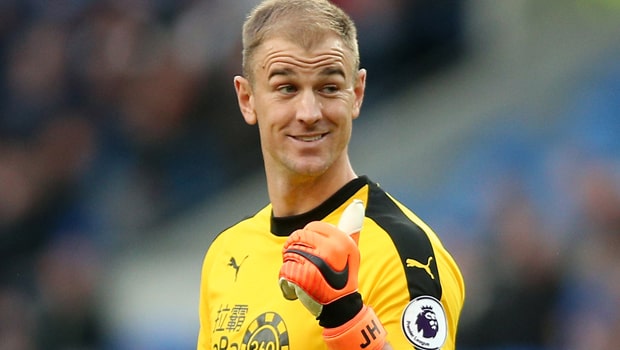 Burnley goalkeeper Joe Hart has ‘nothing to prove’ when he returns to the Etihad Stadium to face former club Manchester City on Saturday, says his current boss Sean Dyche.

The shot-stopper won two Premier League titles, an FA Cup and two League Cups in his decade at Man City.

Hart, now 31, was unceremoniously shown the exit door two summers’ ago when Pep Guardiola took over, the Spaniard making it clear he wanted a goalkeeper that could play out from the back.

Hart spent seasons at Torino and West Ham before joining Burnley in a permanent deal this summer, with the ex-England netminder admitting the last seasons were not major successes.

“He has no point to prove,” said Dyche. “He just wants to get on with it.”

Hart was only signed in the summer due to the injuries suffered by England duo Nick Pope and Tom Heaton, but he has impressed for the Clarets and been ever-present between the posts in the Premier League so far.

“I was pretty sure he was still a top-class keeper. There can be different reasons why you play well at some places and not others. Sometimes you just fit naturally. You can sense it,” he added.

“For keepers, sometimes what is in front of you helps. He wants a defensive unit he has faith with. I think there is a nice connection here. Possibly at other clubs he didn’t find that connection.

“But a lot of credit goes to him for finding his way again.”