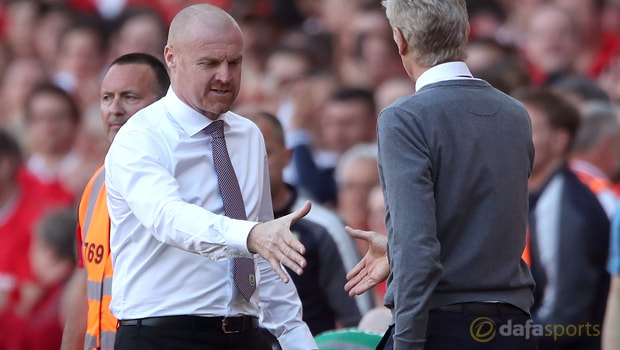 Burnley manager Sean Dyche says he will be taking the Europa League seriously next season although he admitted progressing in the Premier League is still the club’s main aim.

The Clarets have enjoyed a remarkable campaign and, with one game remaining, the club is guaranteed to finish seventh in the league, meaning they will be entered into the third qualifying round of the Europa League.

Breaking into Europe, for a club of Burnley’s size and lack of financial power, is a huge achievement and many believe Dyche should be named Premier League manager of the year for his efforts.

The Lancashire outfit were on the receiving end of a 5-0 thumping at the hands of Arsenal on Sunday in what was Arsene Wenger’s final home game in charge of the Gunners.

It was clear to see the gulf in class between the two teams and Burnley will need to invest well this summer if they are going to compete on both the domestic and European stage next term.

Dyche insists his side will give everything in the Europa League but he admits the main aim is for the team to keep developing and pushing in England’s top flight.

“Pre-season has shifted closer to give us more time to make sure they’re fit and well but enjoy the fact we’ve made it into Europe but the bread and butter is still the Premier League,” he said.

“It is something to try and do well in but there to be enjoyed and respected. “The Premier League is the real stage for the club to continue growing.

We’ve never not taken anything seriously but the real challenge is to continue the journey in the Premier League.”

Burnley bring their season to a close on Sunday when they welcome Bournemouth, who are safe for another season, to Turf Moor.