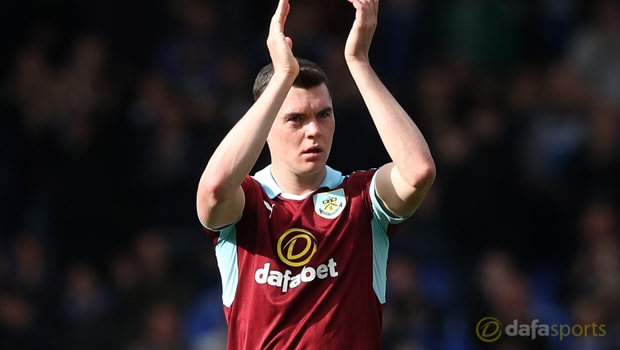 Michael Keane has bid an emotional farewell to Burnley after completing his big-money move to Everton.

The England international has ended his three-year association with the Clarets by joining their Premier League rivals for a fee that could rise to £30million.

Keane played an integral role after joining Burnley from Manchester United, helping the club earn promotion and then survive in the top-flight, forming a solid central defensive partnership with Ben Mee throughout his time at Turf Moor.

The 24-year-old, who has signed a five-year deal with Everton, admits it was a tough decision to leave Burnley and he has been quick to thank boss Sean Dyche and his coaching staff for all their help during his time at the club.

“Firstly, what a tough decision it has been to leave this amazing football club,” Keane said.

“I can honestly say I have had the best three years of my life here, on and off the pitch.

“I will never be grateful enough for the work Sean Dyche, Ian Woan, Tony Loughlan and Billy Mercer have done with me on a daily basis to get me to this point in my career.”

Keane was not the only player to leave Burnley on Monday, as midfielder George Boyd has also moved on to pastures new by joining Championship outfit Sheffield Wednesday.

The two players made a combined 71 appearances for Burnley in the Premier League last season and their presence is likely to be missed at Turf Moor.

Burnley will be hoping to have some new recruits of their own in place for their opening match of the season at Chelsea on August 12.

The Clarets are priced at 11.00 to win that match, while Antonio Conte’s reigning champions are available at 1.20 and the draw is on offer at 7.00.