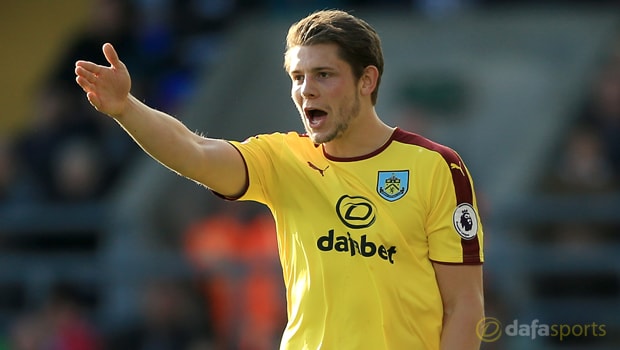 James Tarkowski says he is hoping to fill the void left by Michael Keane this season although the Burnley defender knows he has a fight on his hands to get a starting spot.

Keane left Turf Moor this summer after two years at the club, joining Everton in a £30million deal, and that has left a big gap to fill at the heart of defence.

Former England Under-21 international Ben Mee, who enjoyed an impressive campaign last term, will have to form a different partnership.

Tarkowski, who only made four Premier League starts in the 2016-17 season, is said to be the favourite to get the nod ahead of Kevin Long and Tom Anderson.

However, manager Sean Dyche is still looking for reinforcements while the recent arrival of Phil Bardsley, who can play all across the back, from Stoke has added extra competition for places.

Tarkowski, who joined Burnley in February 2016 from Brentford, says there is a big opportunity on offer and he is hopeful of being handed the chance to replace Keane.

“Keano has gone now so there’s a gap there for someone to fill in,” he said.

“I have got to do all I can to try and make that my spot, but there’s other lads fighting for that spot as well.

So it’s all to play for going into the first game of the season.”

Burnley, who are 2.25 to be relegated, start their Premier League season with a difficult trip to Stamford Bridge on August 12 to take on defending champions Chelsea.

The Blues, who are 4.00 to retain the title, are 1.22 favourites to start with a win, the draw is priced at 6.50 while the visitors are huge 11.00 outsiders to clinch all three points.