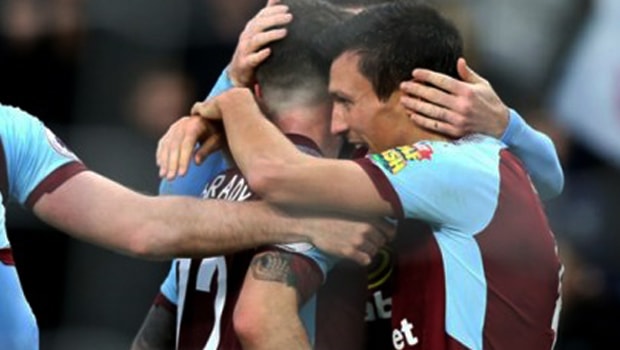 Jack Cork has told his Burnley team-mates the job is only half done as Sean Dyche’s surprise package target a hat-trick of wins in the Premier League at Brighton on Saturday.

The Clarets moved on to 31 points on Tuesday with a 1-0 victory against strugglers Stoke City to make it two wins on the spin.

They briefly move into the top-four places before goal difference pushed them down to sixth after the midweek fixtures were completed.

The Lancashire side head to the south coast to take on Chris Hughton’s promoted Brighton targeting three straight Premier League wins, and midfielder Cork wants them to “keep pushing” on.

Speaking as part of the pre-match press gathering, the former Swansea man told reporters: “I said a few weeks ago if we could get 30 points by Christmas it would be perfect and set us up for the next half of the year, and we could set some new targets.

“To reach 30 points with a few games left in the year is great. The next target is now 40 points and when we reach that we will try and set more targets from there, and try and progress even more.”

Burnley’s rise up the Premier League table has seen manager Dyche’s stock rise and Cork believes they can continue to raise eyebrows by setting a host of new targets.

The stand-in skipper said: “There’s no point saying ‘we’ve reached 40 now, we might as well have three months off until the summer’.

“We’ve got to keep pushing and see how far we can go. We’ve had a great start, it would be a shame if we then decided to give it up.

“Now we’re getting to a point where we could be safe, we need to try and push ourselves on, and see how far we can go.”

Brighton are quoted 2.50 in the match betting and the draw outcome is available to back at 2.80. Burnley are currently priced 3.25 to win in 90 minutes.