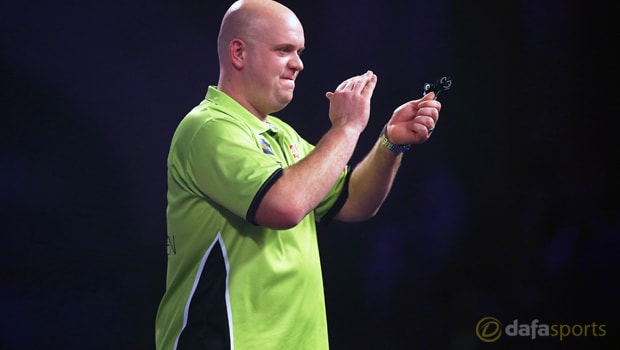 The Dutch crowd pleaser – the 1.67 favourite in the outright betting – recorded a third-best first-round average in the tournament’s history of 106.17 on his way to a 3-1 success at Alexandra Palace, starting the defence of his title in scintillating fashion.

“It’s always nice to come back to Alexandra Palace for the World Championship and a great game like this to start the tournament off is good for your confidence,” Van Gerwen, who has now won 30 successive matches, told reporters. “I also want to say well done to Christian Kist as well because he put me under pressure, he played well, he had over a 100 average.

It was a nice start for me and I’m glad I won this game.” The 28-year-old has enjoyed a remarkable calendar year of success, winning the Grand Slam Of Darts, Premier League, European Championship and Players Championship Finals, as well as the PDC World Cup of Darts, and will now take on James Wilson in the second round at the famous north London venue.

Huddersfield hopeful Wilson beat Poland’s Krzysztof Ratajski – the reigning World Masters champion – 3-1, but fans’ favourite Van Gerwen warned he has no intention of giving up his crown and is intent on ruling the world again. He said: “It was a phenomenal performance for the first round as the first round is always difficult.

I like to start straight away in top gear because if you underestimate people they can kill you – you have to perform round after round, game after game and leg after leg, because it’s the most important tournament of the year.” Last year’s beaten finalist, Gary Anderson, is quoted 6.50 in the outright market and Rob Cross is next in the betting at 12.00, while Peter Wright and 16-time champion Phil Taylor, who will retire after the season-ending showpiece, are trading at 13.00.