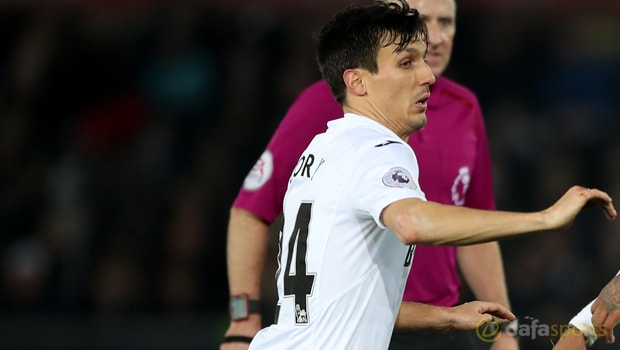 Former England Under-21 international Jack Cork says he is eager to get started at Burnley and take on a “new challenge” after completing his move from Swansea City.

Cork’s move to Turf Moor was confirmed on Tuesday night and the midfielder, who is believed to have cost the Clarets around £10million, has put pen-to-paper on a four-year contract.

This will be the 28-year-old’s third stint with Burnley, after he spent the second half of the 2009/10 season on loan before then joining on a year-long loan deal in the following campaign.

Manager Sean Dyche had made signing a central midfielder a priority this summer after Joey Barton’s contract was not renewed when he was banned from all footballing activity for 18 months for breaching betting regulations.

Cork brings plenty of experience to the squad, having played 80 Premier League games for the Swans, and he played a big role in ensuring the Welsh outfit avoided relegation last season.

The London-born star is now excited to help Burnley, who are 2.25 to drop down to the Championship, progress in the years to come as they aim to push up the Premier League table.

Cork was quoted as saying by BBC Sport: “I’ve heard a lot has changed, the whole set-up has changed and the playing staff is completely different to when I was here.

It’s a new challenge for me and one I’m excited for and I’m looking forward to meeting new people.”

Burnley open their new campaign with an away trip to defending Premier League champions Chelsea and the visitors are the huge 10.00 outsiders to pick up three points, a draw is priced at 7.00 while the Blues are firm 1.22 favourites.