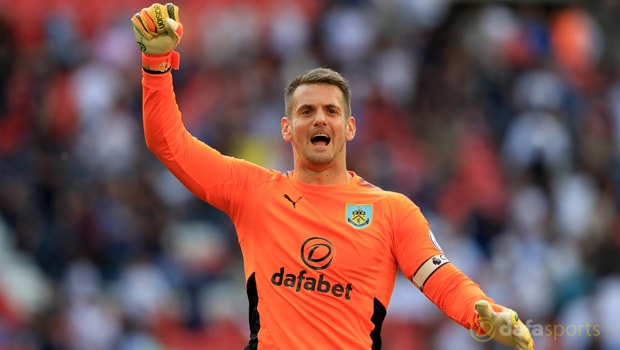 Burnley goalkeeper Tom Heaton insists he is raring to go as he looks to make his return to the first team after a lengthy absence through injury.

Heaton sustained a shoulder injury when falling awkwardly in the victory at home to Crystal Palace in September.

The stopper was forced to undergo surgery and has been patiently working his way back to full fitness over the last few months.

Burnley have handed Heaton some much needed gametime over recent weeks with the under-23s and he feels he is ready to finally return to the first-team fold.

Sean Dyche and goalkeeping coach Billy Mercer watched Heaton complete 90 minutes as the under-23s defeated Queens Park Rangers at Turf Moor on Monday, which was his second appearance for the youth team during the international break, while he has also featured in two behind-closed-doors games.

Nick Pope has excelled for the Clarets during Heaton’s absence and Dyche faces a tough choice in picking a number one for Burnley’s next outing when they travel to West Brom in the Premier League on March 31.

Heaton insists he is ready to resume his position between the sticks as he looks to get a run of games before the end of the campaign.

“I’m ready to go really. It’s my fourth 90 minutes. Each one is a step done and I felt really good today,” Heaton said.

“On the back of an injury you’re desperate to get back playing. It’s been a few long, hard months in the gym and in the physio room, so I’m delighted to be back out on the grass and I think that sort of ticks the box in playing games now.

“It feels good and I’m pleased to be playing. I’ll probably speak to the manager and to the physios, but in terms of where I feel, I feel sharp and ready to go and the arm feels superb.”

Burnley are priced at 3.00 to win on their return to Premier League action, while West Brom can be backed at 2.60, and the draw is available at 3.10.