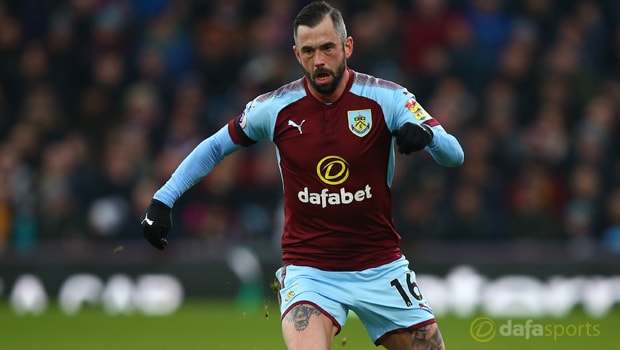 Burnley boss Sean Dyche has confirmed midfielder Steven Defour faces a lengthy spell on the sidelines as he needs to undergo a knee operation.

The Belgium international has played an integral role for the Clarets this term, starting 24 of their 25 Premier League games, but he has been playing through the pain barrier in recent weeks.

The 29-year-old recently underwent a precautionary scan and it has now been confirmed by Dyche that he requires an operation to repair damaged cartilage.

“Defour will have an operation after seeing a specialist, it’s a real blow,” Dyche said.

“It’s come out of the blue, he’d been playing on and felt a soreness in his knee, he played with it for a few weeks.”

Dyche conceded the former Anderlecht player faces an extended period on the sidelines although he will not know the exact timeframe until after surgery.

“Unfortunately, he’s going to be out for some time,” Dyche added. “The specialist will have to sort it out and we’ll wait and see what he says after the operation.”

Defour is less positive about his recovery period as he has indicated on Instagram that he expects to be sidelined for the rest of the season, meaning he is also likely to miss this summer’s World Cup with Belgium.

“Hard to take this one,” Defour posted. “Really gutted I can’t end the season in the way I wanted it. Promise to come back stronger for the new season.”

Burnley will be hoping to bounce back from the setback of losing Defour when they host league leaders Manchester City on Saturday.