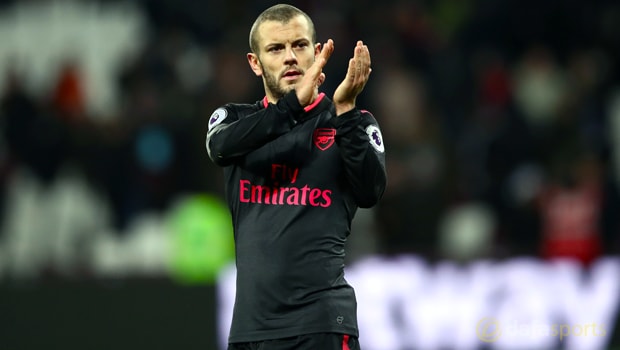 England international Jack Wilshere has revealed negotiations over a new contract with Arsenal are yet to commence although he is confident talks will happen at some point.

Wilshere, who has struggled with injuries over the past few years, made his first Premier League start for the north Londoners in 577 days on Wednesday night against West Ham.

The 25-year-old was arguably the best player on the pitch for the Gunners, but he was unable to spur his side on to the victory at the London Stadium, with the entertaining game ending 0-0.

Arsenal have now slipped 19 points behind runaway leaders Manchester City whilst Arsene Wenger’s men are down to seventh in the table, a point adrift of Tottenham Hotspur in fourth.

Wilshere’s contract is due to expire at the end of the campaign and there have been several reports claiming the FA Cup holders are working hard to negotiate an extension.

However, the midfielder, who is hoping to retain starting spot for Saturday’s home clash against struggling Newcastle United, has revealed talks are yet to take place.

“There’s no update, we’re in the same position we were in two weeks ago,” Wilshere said. “There’s not really a date in the diary.

I’ve only read what he (Wenger) has said in the media. At the moment, I’ve just played my first game in the Premier League.

“I’m concentrating on staying fit and staying in the team. That will look after itself and when it’s the right time, I’m sure the boss will pull me so we can have a chat.”

Arsenal are 1.29 favourites to pick up all three points against the Magpies, the draw is priced at 6.00 whilst the visitors, who have taken just one point from a possible 24 over the last seven matches, are massive 11.00 outsiders.