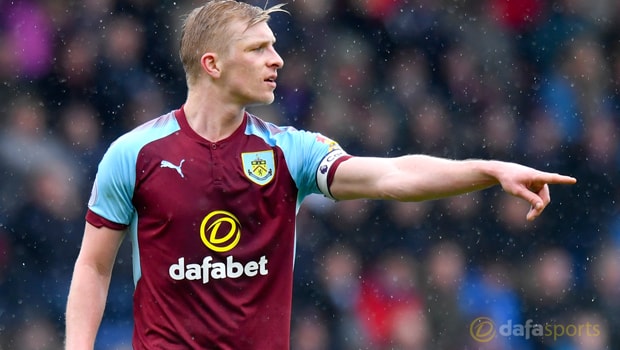 Burnley manager Sean Dyche has confirmed the club are currently involved in talks with Ben Mee’s representatives about extending his stay at Turf Moor.

Former England Under-21 international Mee, who joined the Clarets permanently in 2012 following a successful loan spell, has been an integral part of the first team since arriving, making almost 200 league appearances.

The 28-year-old has formed a successful partnership with James Tarkowski at the heart of defence this season and Burnley are almost assured of a place in the qualifying rounds of the Europa League for the next campaign.

Members of Dyche’s squad are rumoured to be attracting interest from rival clubs in the Premier League and reports are suggesting several bids could be lodged for the defender during the summer transfer window.

With just one more year left on Mee’s current deal, the Lancashire outfit are desperate to extend his stay and the manager has revealed positive talks are ongoing over a new contract.

“We’re just active with his representatives. We have been for a while,” Dyche was quoted as saying by the Lancashire Telegraph.

“You’d be surprised how many players we are speaking to, not always to sign a new deal, but just to say: ‘Look, we’re aware of the situation.’

“We try to be really open with the agents, because there’s no point in not being. Yet again, it’s my way of working.

Burnley return to action on Sunday when they make the trip to the Emirates to take on Arsenal and the visitors are 6.00 outsiders to win, a draw is priced at 4.00 whilst the Gunners are 1.53 favourites.