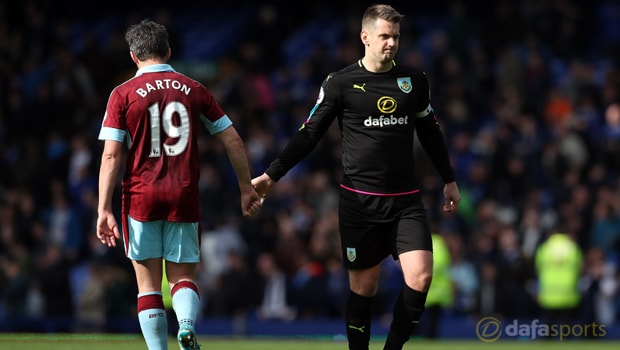 Burnley captain Tom Heaton is confident his side are heading in the right direction to break their duck away from home before the end of the season.

Saturday’s 3-1 defeat at Everton extended the Clarets’ run to 17 games on the road without a victory but there were still plenty of positives to take from their performance.

Fortunately for Sean Dyche’s men, they have managed to win 10 times at home, a tally that looks set to keep them in the top flight for next season.

However, failing to win away will see them join the likes of Leeds, Coventry, Wolves, Norwich, Derby and Hull in the record books.

Sunday sees Burnley welcome Manchester United to Turf Moor for a game they are 7.00 to win, with the draw 4.00 and the Red Devils 1.53.

The Clarets have never lost at home to United in the Premier League era and another strong result would only boost their confidence levels.

Only Crystal Palace and Bournemouth remain of their scheduled away trips and time is running out for the Lancashire club.

Heaton insists confidence remains high within the camp following the defeat at Goodison Park and admits his side are pushing hard for that elusive victory.

“I think it’s been building. We’ve had some decent performances away but that win is still elusive,” he said.

“(The performance at Everton) is certainly up there, certainly one of the better ones. We moved the ball well, mixed it well and made it uncomfortable for them.

“It was just a shame that we couldn’t capitalise on that. There are positives to be taken but overall we’re desperate for that first win.”