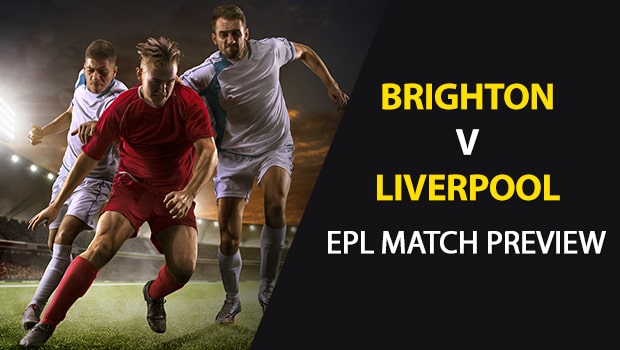 Brighton & Hove Albion get set to match up with Liverpool this Saturday at The American Express Community Stadium in Falmer, East Sussex. Liverpool looks to bounce back from back-to-back losses vs Wolverhampton (1/7) and Manchester City (1/3).

Draw:17.7 percent chance the match ends in a draw. There’s a draw in 19 percent of AccuScore sims, suggesting some added side value on the draw, but not much.

Dominating the Opponent: Liverpool have never lost on the road vs Brighton. The last five matchups with Brighton as the host featured 25 goals (16 for Liverpool, 9 for Brighton).

Trend: Liverpool have won their last eight Premier League games kicking off at 3pm on a Saturday. Seven of those eight games have resulted in Liverpool winning by 3 or more goals.

Fun Fact: According to Goal.com, of the 209 Premier League players to have been involved in 100+ duels this season, Liverpool defender Virgil van Dijk has the highest percentage of duels won (75.2%). The only other player that comes close is Brighton defender Shane Duffy.

Head to Head: These two sides last met in Premier League action back in August of 2018 when Liverpool won 1-0. Liverpool have defeated Brighton & Hove in their last 6 matches overall — dating back to January 1991.

Glenn Murray has a 22-plus percent chance to score this weekend, averaging 1.12 shots overall per sim, 0.6 shots on goal per and 0.25 goals per sim.

Liverpool winning outright is a 4-star (out of four) AccuScore hot trend pick. On average, they win simulated matches by a margin of +1.52 goals.