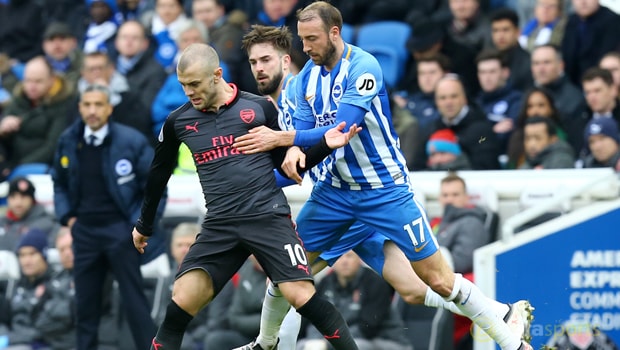 Brighton striker Glenn Murray has called on his team-mates to keep working hard towards their target of Premier League survival.

The Seagulls boosted their hopes of securing another season in the top flight on Sunday when they shocked Arsenal.

Lewis Dunk and Murray both netted to cancel out Pierre Emerick Aubameyang’s strike and Brighton now sit in a lofty 10th spot.

Brighton’s form at home has been crucial to helping them climb seven points clear of the bottom three, having won three successive games at the Amex, while they have only lost once in their last seven on home soil.

However, Murray, who has scored 11 times in 19 league starts this term, insists they still have a lot of work to do to ensure they beat the drop.

Murray said: “We are edging [to safety], I am sure if we lost every game we had left, we would go down. We have to keep at it and hopefully see us over the line.”

Murray has never previously reached double figures in a Premier League campaign and he has put his fine record this term down to his team-mates.

He added: “[My goalscoring] is down to my supply line, the people who feed me and Gross put in another fantastic cross. It does not matter what league you are in, the goalposts don’t move.”

Brighton can be backed at 3.40 to claim victory on the road next time out when they travel to Everton, who are priced at 2.25 to pick up all three points, while the draw is available at 3.25.