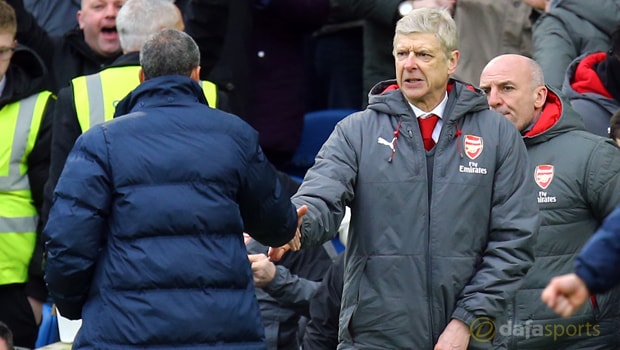 Arsene Wenger admits Arsenal are unlikely to secure a top-four finish this season after falling to a 2-1 defeat away at Brighton on Sunday.

The Gunners have now lost four games in a row across all competitions following Sunday’s disappointment at the Amex Stadium, while they have only won two of their last nine Premier League outings.

Arsenal, who are priced at 6.50 to win the Europa League, fell behind to goals from Lewis Dunk and Glenn Murray inside the opening 30 minutes and the home side showed discipline to hold out for all three points after Pierre Emerick Aubameyang pulled one back.

Wenger has come under growing pressure following Arsenal’s recent run and the Frenchman admits it is a nearly impossible task.

“It is very difficult, nearly impossible now, we are too far behind,” Wenger said.

“We need two teams to collapse not one. But at the moment we have different worries in how to comeback to winning a game.”

The Gunners struggled to get any rhythm going on the south coast and Wenger believes his men were jaded after back-to-back 3-0 defeats against Manchester City.

He added: “We were passive, struggling for confidence and heavy legged but responded well in the second half.

“It is difficult to recover from what happened to us last week – we are going through a tough time.”