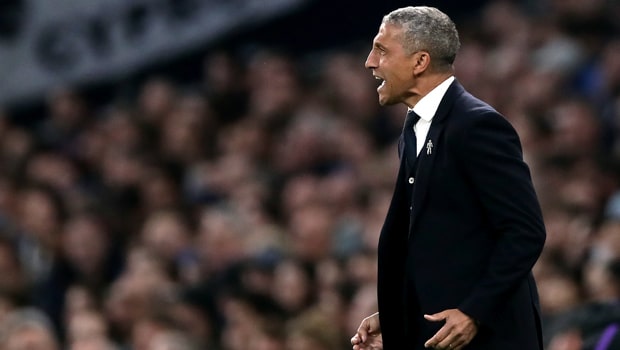 Chris Hughton is confident Brighton will retain their Premier League status despite a tough finish to the campaign and a precarious position.

Hughton’s team have been dragged into the relegation scrap after a run of five defeats in six games, during which they’ve failed to score a single goal.

They are just three points clear of Cardiff City in 18th with three games remaining, with one of the two likely to join Fulham and Huddersfield in dropping to the Championship next season.

Brighton have a tough run of games to come as they face Hughton’s former club Newcastle on Saturday at the Amex Stadium before games against Arsenal and Manchester City to conclude their campaign.

Hughton feels Brighton will do enough to consign Cardiff to the drop. “Yes,” he said, when asked if Brighton can stay up.

“I think we need to go into every game, every moment, every training day as confident as we can.

“Whenever you have that type of a challenge you look for people around you, look for players to stand up to that challenge.

“Certainly in the last couple of games I don’t think anybody could fault the endeavour from the team or a desperation to make sure we stay in this division.”

Defeating Rafael Benitez’s side on Saturday would be a huge step towards safety for Brighton but, despite their recent woes in front of goal, Hughton is eager not to pile pressure on his players to attack at all costs.

“It’s a game of football we want to win and you can win it in many different ways,” Hughton said. “We are up against a very good team who can punish you. Yes, we want to score goals and win the game but we have to do it in the right way.”