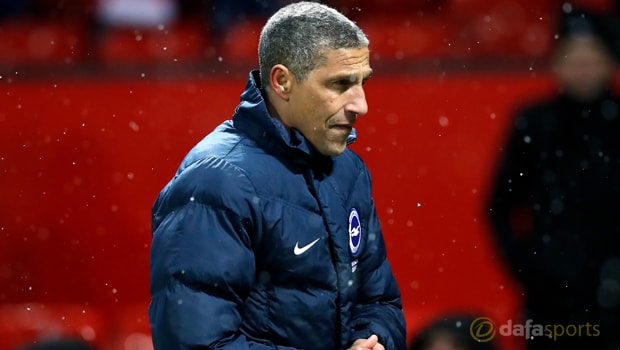 Chris Hughton admits he’d have gleefully accepted Brighton’s current plight at the start of the season.

The Seagulls are in 12th place, six points clear of the relegation zone, with eight games left to play. Before the international break, they suffered a defeat away at Everton and an FA Cup loss against Manchester United at Old Trafford.

Hughton wasn’t too disappointed with the performance in the latter game, though he’d have preferred not to have the international break afterwards.

“The international break came at the wrong time. The Everton game had been our poorest performance, but the FA Cup defeat at Old Trafford was good enough to get something,” he said.

“I’d have been delighted if someone told me we would be in this position.

“When you go into the season you know you’ll have a motivated team who will give everything they can to make sure we stay in this division. But you just don’t know.”

The former Newcastle boss said the early season signs made him confident that his squad was going to be good enough to compete amongst the big boys, but he knows they must work hard now to finish the job off.

“The signs were there early in the season that we could at least compete but competing and getting results in this division are two different things,” he added.

“We have eight games left and we have some very difficult games and we will have to play at a level to get points that are needed to stay up.”