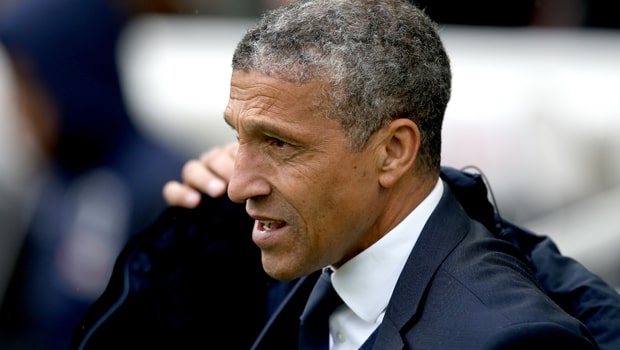 Chris Hughton doesn’t anticipate that he will have any concerns motivating his Brighton team for their crucial relegation battle with Cardiff on Tuesday.

Brighton were hammered 5-0 by Bournemouth on their own patch at the weekend and must quickly lift themselves for the visit of Cardiff.

Victory would all but seal their Premier League safety and condemn 18th placed Cardiff to an immediate return to the Championship.

While admitting that Saturday’s defeat was Brighton’s worst performance of the season, Hughton suggested his players won’t have any trouble rebounding. “There won’t be any difficulty in lifting the players,” said Hughton.

“There won’t be one player who hasn’t been through a difficult period on the back of a bad defeat.”

With a five-point cushion and a game in hand over Cardiff, the Seagulls are in a strong position and victory over Neil Warnock’s side would all but cement their survival.

Hughton said there were ‘no excuses’ to be put forward for Saturday’s setback but he retains faith in his players.

“It’s always about how you respond. You respond because you’re a professional and because you don’t have a choice – this is the game, the ups and downs of the game,” he added.

“I expect very much a reaction from our players.” “I don’t think you can look at excuses, there are always other teams who have been through something similar,” Hughton said.

“There will never be any excuses here. “If we are on our game, performing well, we have every chance.”

Brighton are 2.05 to beat Cardiff. The visiting side are 4.00 to get the win they desperately need while the draw is 3.25.