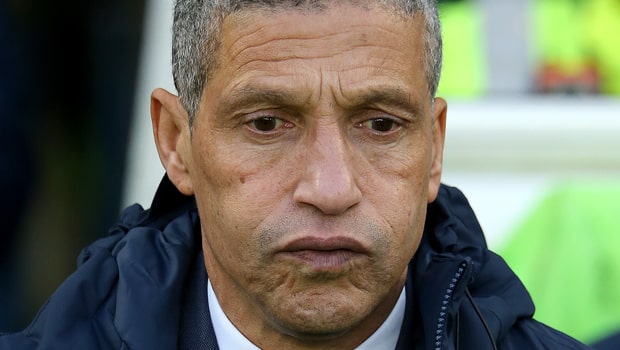 Brighton manager Chris Hughton has questioned why VAR wasn’t used to award his side a penalty in Saturday’s FA Cup stalemate with West Brom.

The Baggies, who are pushing for an immediate return to the Premier League, were always expected to provide a serious obstacle for Brighton. With that in mind, Hughton named a strong starting XI for the fourth-round tie at the Amex Stadium, however, they were unable to find a breakthrough.

Fortunately, it doesn’t end their hopes of going deep in the competition and they will have the opportunity to secure progression when they meet West Brom, who are priced at 7.00 to win the Championship title, in a replay at the Hawthorns.

Hughton said: “The positive is that we’re not out of the cup — but at this moment, we’re probably disappointed because we’re at home and we didn’t take advantage of that.

“West Brom defended well and had a game plan. They’re very good at what they do and they’re a team in very good form at the moment.

“We certainly put out a team that we felt was a strong enough to win the game, but on the balance of play, we should have made it more difficult for them.”

Brighton were unlucky not to take the lead when Dale Stephens hit the post in the second half, while Hughton felt they could have had a penalty when Jurgen Locadia went to ground in the box.

With VAR available to Lee Mason, Hughton was surprised the referee didn’t lean on the technology to take another look at the incident.

He added: “I have no complaints with the result — West Brom worked very hard, even though I thought we were the better team on the day. “But it was a VAR game, and my first impression at the time was that it was a penalty.

The ball comes off the post and Locadia would have been in a position to get on the ball. “He was impeded in the box and went down, so I’m really surprised that it wasn’t picked up by the VAR.”