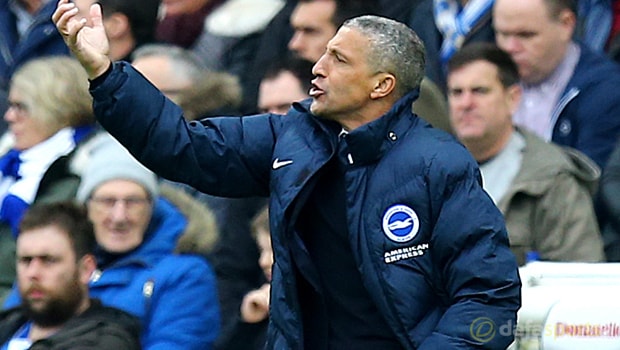 Brighton boss Chris Hughton admits that a fiercely tough end to the season has increased the pressure on his team to secure their Premier League status quickly.

The Seagulls go into this weekend in 13th place, with six points to spare on the relegation zone.

They welcome Huddersfield, currently 16th, to the Amex on Saturday with a big chance to pull themselves further clear of the dreaded drop zone.

The Terriers meanwhile know that a win at Brighton would be enough to see them draw level on points with Hughton’s side.

Brighton will play all of the current top three in their final three games of the season, with Manchester City, Manchester United and Liverpool in the space of just nine days looming up ahead of them.

The prospect of such a daunting finale to their maiden Premier League journey isn’t lost on Hughton, as he admits the next three games will take on added significant as a consequence.

“It’s a difficult end to the season, but an exciting one as well. Yes, it does put a little bit more pressure on other results,” he admitted.

“What we want to do is get the points that we need to make sure that we stay in this division as quick as possible.”

Brighton are 1.91 to win on Saturday while Huddersfield are 4.50 and the draw is 3.50. Despite a tough challenge in their final three matches, Hughton says Brighton will not be carrying a defeatist attitude into those games.

“I don’t think you can afford to go into any game thinking you can’t get a result. That’s the way we’ve been throughout the season and that’s the way we’ll continue to be,” he added.

“Of course there are only a certain amount of games left where we are at home. I think it puts a bit more pressure on because it’s a home game and we all know what’s at stake.”