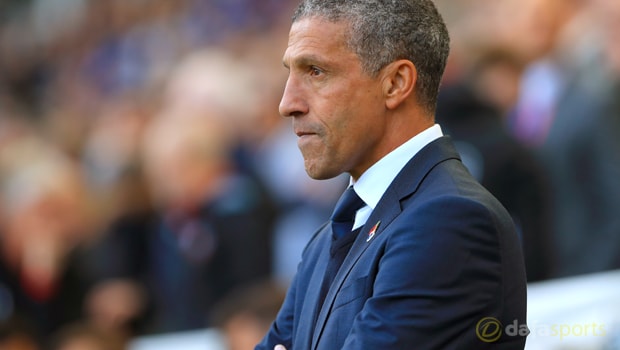 Brighton boss Chris Hughton has called for video technology to be used in the Premier League after his side were denied a penalty during their 2-2 draw with Stoke on Monday.

The Seagulls twice came from behind to secure a point at The Amex, a result that leaves them ninth in the league standings and unbeaten in their last five top-flight games.

However, it could have been even better for the South Coast club, as they were denied a first-half penalty when forward Glenn Murray appeared to be fouled in the area by Stoke defender Ryan Shawcross.

Neither the referee, Lee Mason, nor his assistants spotted the infringement, leaving Brighton more than frustrated and after the match, Hughton called for the use of video technology to help the officials.

“It was a definite penalty,” Hughton said.

“I was certain it would be given, if not by the referee then the linesman on that side.

“When video replays come in, it will clear up some of these instances.

At the moment, you’re relying on the referee making a judgement or getting into a position – and if that’s not the case you have two assistants and a fourth official to help.

“I find it difficult to understand the assistant doesn’t see it the same way I do.”

Brighton will now have to dust themselves down as they face a daunting next outing on Saturday when they travel to Old Trafford to take on Manchester United.

The Seagulls have never won an away fixture against United, but they are priced at 17.00 to end that run on Saturday, while Jose Mourinho’s side are available at 1.18 and the draw is on offer at 7.00.