Posted by Vincent Henderson on November 21, 2017 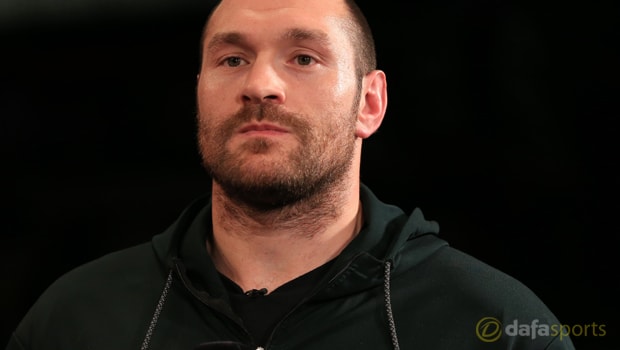 Tyson Fury has declared his interest in fighting Tony Bellew at London’s O2 Arena next year.

Former WBA (Super), IBF, WBO and IBO heavyweight champion Fury has not fought since beating Wladimir Klitschko in Dusseldorf nearly two years ago and he is currently awaiting the outcome of a UK Anti-Doping hearing.

That has not stopped the 29-year-old from challenging fellow Brit Bellew to a showdown next year, with the Liverpudlian currently weighing up his options after his December fight with David Haye was called off due to his opponent suffering n arm injury in training.

Fury, who has also previously seen a fight with Haye cancelled, is now hoping to take on Bellew next year and he has described himself as the best heavyweight in the division.

Speaking in a video on his official Instagram account, Fury said: “I just heard that David Haye has pulled out against Tony.

Fury is convinced he would wipe the floor with former cruiserweight Bellew and he has urged his rival to prove him wrong by accepting the challenge.

He added: “Be no contest, one uppercut, ceiling job. If you think you can do any different, prove it wrong.”