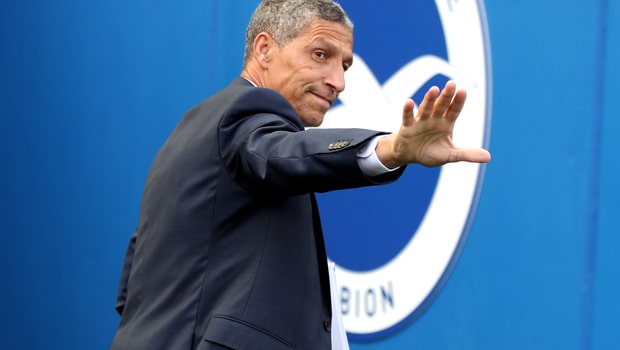 Brighton have wasted no time in sacking manager Chris Hughton following the club’s poor run of form in 2019.

The Seagulls finished 17th in the Premier League, two points clear of Cardiff City in the final relegation place. Brighton gathered just two wins from 18 top-flight matches since the turn of the year, enough to convince chairman Tony Bloom ‘the time was right’ for a change.

“Undoubtedly, this has been one of the most difficult decisions I have had to make as chairman of Brighton & Hove Albion, but ultimately one I have made due to how we struggled in the second half of the season,” Bloom said.

“Our run of three wins from 23 Premier League matches put our status at significant risk. It is with that in mind, and the performances during that period, that I now feel it’s the right time for a change.”

Hughton replaced Sami Hyypia at the Amex Stadium in December 2014, with Brighton just above the Championship relegation zone. Having lost in the play-off semi-finals in 2016, Hughton led Albion to promotion the following season with a second-placed finish.

They’ve twice survived amongst the big boys since, while Hughton also guided the club to only their second FA Cup semi-final earlier this season, losing narrowly to Manchester City. Bloom praised the departing manager for his work and insisted his legacy will be a positive one.

“Chris has done an excellent job over the past four-and-a-half years,” added Bloom.

“First stabilising our club, reaching the playoffs in his first full season, securing our first-ever promotion to the Premier League, and retaining our status in two successive seasons.

“Chris will always be very fondly remembered by Albion staff and fans as one of our club’s finest and most-respected managers.”