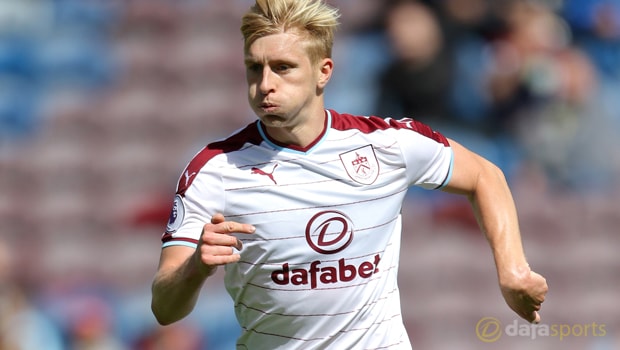 Ben Mee admits he is excited about the challenge of trying to shackle Alvaro Morata when Burnley open their Premier League campaign at Chelsea on Saturday.

The Spanish striker recently joined the Blues from Real Madrid for around £70m and is being tipped to provide the goals lost by the expected departure of Diego Costa.

Morata will feel he has a point to prove after missing a penalty in last weekend’s shootout as his side went down to Arsenal in the Community Shield, an incident that has already raised questions about him.

It is also the start of a new era for Mee, with him set to begin the season without long-time partner-in-crime Michael Keane, who has moved on to Everton.

The 27-year-old admits he will be doing his research on the former Juventus star and is looking forward to the challenge of facing one of the best frontmen around.

“It will be good to see what Morata is like,” Mee said.

“I think we’ll have a few clips on him and they’ll have done a little bit of research on him that will be fed back to us.

We’ll play it by ear. “For a defender especially it’s worth watching strikers movements, not too much, not overkill but I think you can get an idea of what type of player they are like.

“Some players have different styles but that won’t affect the way that we go about our business.

We’ll have a game plan and I’m sure we’ll have the same game-plan regardless of whoever plays up front.”

The Clarets are 12.00 to get a result on Saturday, with the draw 5.50 and Chelsea 1.25 to make a winning start to their Premier League title defence.