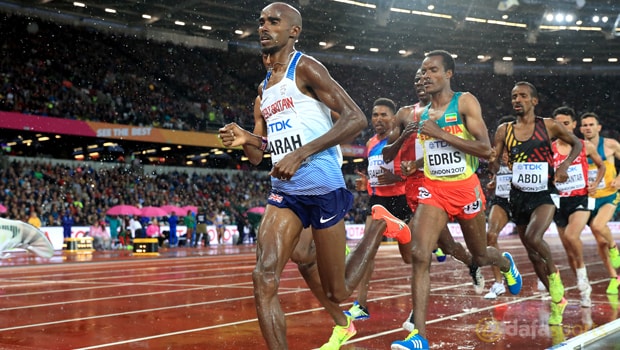 Mo Farah admits he is hoping to inspire the next generation with his exploits at the World Athletics Championships.

Having won the 10,000m on Friday, the two-time double Olympic distance champion returned to the London Stadium on Wednesday for the opening round of the 5,000m.

On a wet and windy evening, he came home second to guarantee his place in Saturday’s final.

The race will be Farah’s penultimate outing on the track, having already confirmed that he will bow out in Zurich in order to focus on the road.

Victory would clinch his fifth straight long-distance double at a global championships and he is 1.36 to triumph in the 5,000m, with the Ethiopian duo of Muktar Edris and Yomif Kejelcha his nearest rivals at 7.00.

The World Championships have been a mixed affair for the Brits, with the 34-year-old’s gold the only medal the hosts have to show for their efforts so far.

Farah admits he found it tough to rediscover his rhythm in Wednesday’s race but he’s keen to ensure he is ready to go at the weekend, as he wants to inspire the next generation of athletes.

Farah told BBC Sport: “It’s all good but I am a bit tired – that was a tough run after the 10k final but I can just go back and rest and see what I can do.

“It’s difficult to motivate yourself after a win like that but you aren’t going to win unless you recover, get rest, turn the lights off and prepare all you can.

“Anything is possible. I have always said train hard, win easy.

To all the kids out there, you can be like me! We have to find the next generation of athletes.”