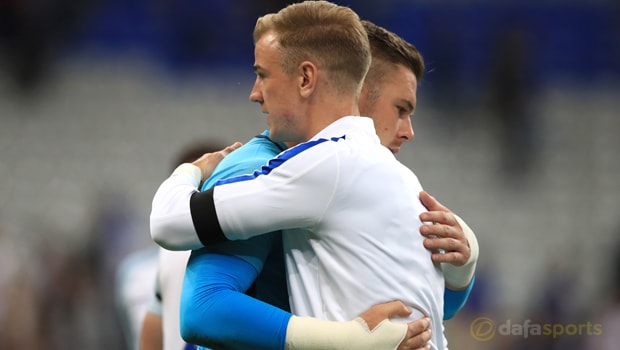 Jack Butland admits he was surprised to learn that Joe Hart wasn’t going to be part of
England’s World Cup squad this summer.

Hart, 31, has 75 caps for England and has been part of Three Lions’ squads at four major tournaments but, following a patchy season on loan at West Ham, Gareth Southgate chose not to take him to Russia.

Instead, the England manager will rely on the trio of Butland, Jordan Pickford and Nick Pope, who have only nine senior caps between them.

Stoke shot-stopper Butland conceded he was a bit shocked Hart missed out, though he says Southgate made a ‘gutsy’ decision.

“I think we all thought ‘wow’,” Butland said. “It was a gutsy decision from the manager.

“I’ve spoken to Joe. I know he’s devastated to miss out and I’m gutted for him.

“I’ve known Joe a very long time. He’s been my hero since I was 14 years old and I still look up to him now. It was important for me to tell him that because you don’t often get opportunities to tell people what you really think about them.”

While Everton’s Pickford is roundly tipped to start the opening game against Tunisia in Volgograd on June 18, Butland says the fact there is no recognised first-choice is healthy for all three of England’s goalkeepers.

“It’s a great position to be in,” Butland said. “Ask any keeper what it’s like when there’s a recognised No. 1, the competition might not be as high. You’re after that competition because it drives you on further.

“They are all my opponents and I’m theirs, but as a result we all push each other forward.”

England are 17.00 to win the World Cup in Russia, while they are 4.50 to collect a maximum nine points from their Group G games against Tunisia, Panama and Belgium.