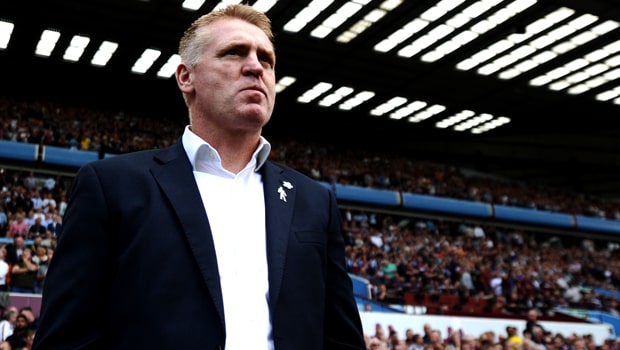 Dean Smith wants to see his Aston Villa side asking questions of visitors Everton when they meet on Friday night.

The Toffees come to Villa Park knowing a win would send them top of the Premier League table. Smith’s side, Championship play-off winners last season, are pointless after defeats away at Tottenham and at home to Bournemouth.

Everton have recorded back-to-back 1-0 wins at Crystal Palace and at home to Watford and Marco Silva’s side are the only top flight team yet to concede a goal. That is something Smith hopes his side can alter.

“Their defensive organisation has been very good and I’ve been impressed by what I’ve seen so far in their two games against (Crystal) Palace and Watford,” said the Villa boss of their next opponents.

“They’ve not been free-scoring either – just the one goal in the two games but they’ve not conceded so it’s going to be tough for us to open them up – but that’s our job at Villa Park.”

Having been breached twice in the first 12 minutes against Bournemouth last weekend, Villa responded well and were close to earning a draw after Douglas Luiz scored midway through the second half to cut their arrears.

It was an encouraging performance and Smith is confident his players can build on it to get their first points on the board soon. “I thought we were very close last week,” he added.

“We made two silly errors within the first 10-15 minutes and it cost us two goals.

In the second half I thought we were good and put Bournemouth under an awful lot of pressure and probably deserved a point from the game. “It just shows that we’ve got a good team and the performances have been okay so far. We just need to up them and when we do that we will win games.”