Dean Smith: Villa back where they belong 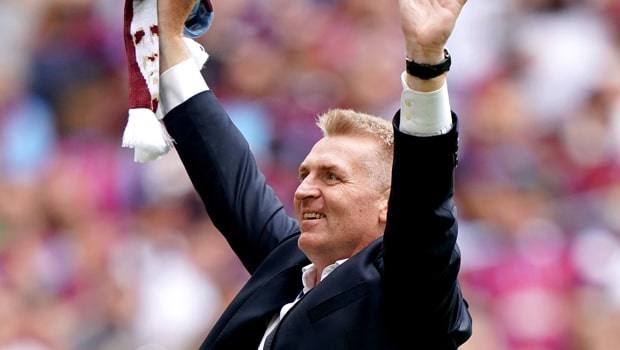 Dean Smith feels Aston Villa has always felt like a Premier League club after they ended a three-year stay in the Championship.

The West Midlands giants held off Derby County at Wembley on Monday in their playoff final, coming out with a deserved 2-1 success.

Steve Bruce was replaced in the dugout by Brentford manager and Villa fan Smith in October, with former Chelsea and Villa defender John Terry as his assistant.

Despite some ropey form around the turn of the year that saw Villa slip eight points off the playoff places, having played two games more than some teams around them, they went on a 10-game winning run that turned things in their favour.

They edged out neighbours West Brom on penalties in the semi-finals before seeing off Derby on Monday and Smith feels they are going back to where they belong now. “Reality sets in now,” he said at Wembley.

“It’s no more that we deserve because the players have made history (with the winning run).

“The potential here is massive. It feels right we are a Premier League club because of the history and the fan base that we have.”

While making no secret of the fact that he’s got Villa close to his heart, Smith is adamant the club belongs in the top echelons of English football. Having lost to Fulham 12 months ago in the final, everyone connected deserves praise.

“The potential of the club is massive. It feels right. I believe this is a Premier League club. That’s not me speaking with a supporter’s head on. History tells you that,” he added.

“We’ve fallen on hard times. Last season was tough for everyone who went through the defeat here to Fulham. The players and the owners deserve what we are going to get.”