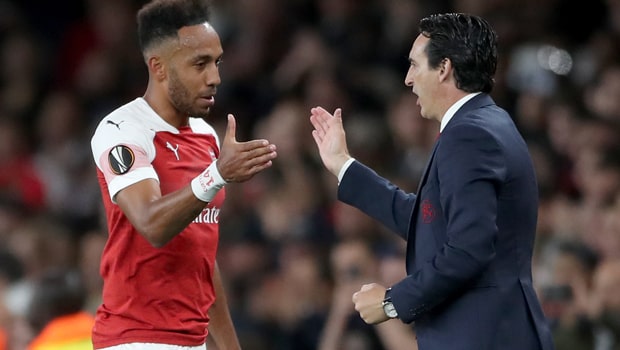 Arsenal boss Unai Emery feels there is still much for his side to work on after Thursday’s 4-2 Europa League victory over Vorskla Potalva.

The Gunners were indebted to Pierre-Emerick Aubameyang for the win as the Gabon international found the net in each half, while Danny Welbeck and Mesut Ozil also got on the score sheet to help the north Londoners kick off their Group H campaign in style.

However, the Ukrainians bagged two late goals through Volodymyr Chesnakov and Vyacheslav Sharpar to take some of the gloss off what looked like being a comfortable evening for the Premier League side.

It was the second consecutive game in which Emery’s men had conceded late on and the Spanish tactician recognises that it is one aspect of his team’s performance that needs addressing.

“Little by little we are conceding a few chances to the opposition, the same like in Newcastle,” said Emery.

“But we need to continue to improve on this because in the last minute in Newcastle and again today in the last 20 minutes, we conceded two goals.

“Our challenge is to be competitive for 90 minutes of each match and this is one thing to improve.”

Arsenal have won three straight top-flight matches after losing their first two and will hope to add another three points to their tally when Everton arrive at the Emirates on Sunday afternoon.

The Toffees, who are in mid-table and have endured a stuttering start to the campaign under Marco Silva, were beaten 3-1 at home by West Ham United last time out and will not be high on confidence for their trip to the capital.