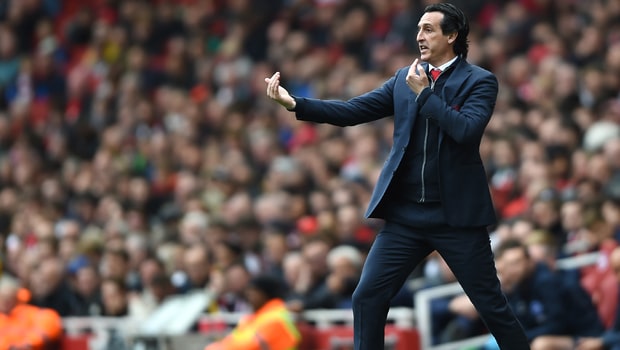 Arsenal boss Unai Emery says the focus is now on the Europa League after the Gunners’ top-four hopes were all-but ended by Brighton on Sunday. Emery’s side were held to a 1-1 draw by Albion at the Emirates Stadium and trail Spurs in fourth spot by three points with just one game left.

Tottenham have a superior goal difference, with Arsenal needing an eight-goal swing in their favour, making a top-four finish only mathematically possible going into the final round of fixtures. However, the north Londoners can still qualify for the Champions League by winning the Europa League and Emery says that now has to be the priority.

“We had the idea to continue taking chances for the opportunity against Burnley next week [in their final Premier League game of the season], but today we drew,” he said.

“We know they are very organised and strong defensively, so the key was scoring the second goal. We tried to do that and they gave us some minutes to come back, and again we tried for the second goal and made chances, but their defence did very well and their goalkeeper made some big saves.”

Arsenal head to Valencia for the second leg of their Europa League semi-final tie on Thursday and are well placed to secure a spot in the final after last week’s 3-1 win over Los Che in London. Emery has warned against complacency, and he wants his players fully focused on the task in hand when they travel to the Mestalla.

He added: “Now our way is to be strong in our focus for Thursday.

“I think we can speak now about the different situations and issues in the season, but it’s better to focus for Thursday against Valencia – and we are going to do the analysis also in the Premier league, because it’s our first target and we didn’t take this position like we wanted.”

If Arsenal reach the final, they will face either Premier League rivals Chelsea or Germany’s Eintracht Frankfurt.

Arsenal are 3.80 to beat Valencia on Thursday and 2.88 to win the Europa League outright.