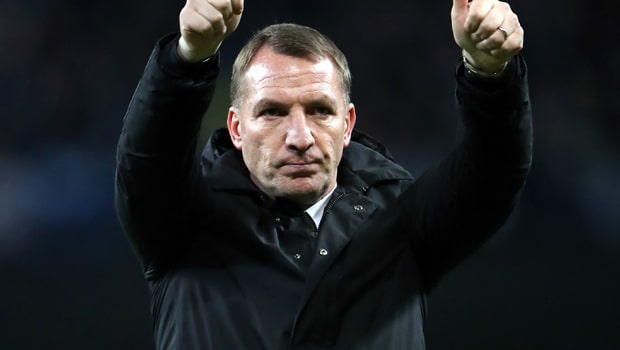 Leicester City boss Brendan Rodgers was quick to praise his players after their battling display against Manchester City on Monday night.

The Foxes lost 1-0 at the Etihad Stadium but they put up a spirited performance before Vincent Kompany’s wonder goal settled the game.

Leicester stood tall for the majority of the game and they looked to be causing problems on the counter, but they left Manchester with nothing after a stunning goal from Kompany.

The Belgium international let fly from 25 yards out to beat Kasper Schmeichel and Rodgers refused to criticise his players.

He believes his team will learn their lessons from the game as they try to end the campaign on a high by beating Chelsea at home on Sunday.

“I thought the first half in particular, we played with a lot of quality,” Rodgers told LCFC TV.

“Our confidence was good in our build-up play and we played through their pressure and gave them a lot of problems.

“We needed to carry that into the second half and we didn’t, so we’ll analyse that. We started to go a little bit longer with our build-up play and the problem with that is it gives you a little bit of a rest for one second, but then it comes back quicker.

“It was just one of those games, but I’m very proud of the team. I think the performances that we’re starting to see now, especially against the big teams, bodes well for our future.”