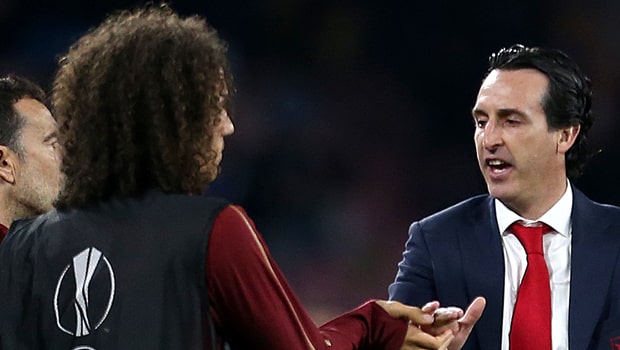 Unai Emery said he was proud of his Arsenal players after they sealed a 3-0 aggregate success over Napoli in the quarter-finals of the Europa League.

The Gunners went into Thursday’s second leg at the Stadio San Paolo with a 2-0 advantage to hold on to and they produced a disciplined display that was capped by a superb free kick from Alexandre Lacazette on 36 minutes.

It is the second season in a row that Arsenal have made it through to the semi-finals of the Europa League and, after losing to Atletico Madrid at that stage 12 months ago, they will once again face Spanish opposition in Valencia, who claimed a 5-1 aggregate success over Villarreal to book their place in the last four.

Emery was certainly pleased with the way his side performed in Naples, as Arsenal recorded back-to-back away wins for the first time since November.

“I am very proud of my players and of our work,” the Spaniard told reporters. “We show the players have the habit to play matches against good teams, in a good atmosphere, and show big personality.”

With a Champions League qualification place up for grabs for the winner of the Europa League, Emery believes the competition is just as important as the Premier League, where Arsenal remain in a battle to finish in the top four.

“It’s a title and gives us the possibility to play in the Champions League when in our domestic league a lot of teams are trying to take it,” he added.

“The Europa League is for us now with Premier League a very important competition.”

Emery certainly knows what it takes to win the Europa League – he won three consecutive titles with Sevilla from 2014-2016 – and Arsenal are priced at 3.00 to go all the way this term and claim their first piece of silverware on the continent since the 1994 Cup Winners’ Cup.