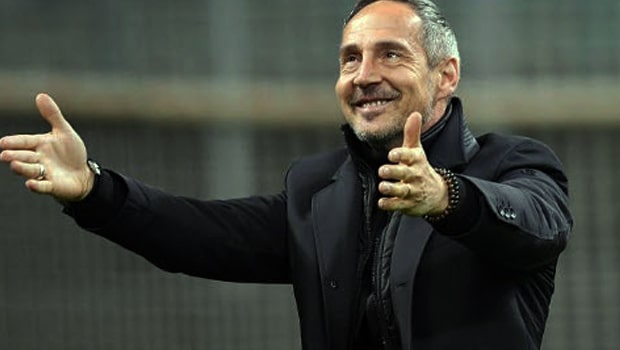 Eintracht Frankfurt boss Adi Hutter says his side produced a ‘perfect’ display as they overcame a two-goal deficit to knock Benfica out of the Europa League at the quarter-final stage.

Frankfurt had lost last week’s first leg in Lisbon 4-2, but goals from Filip Kostic and Sebastian Rode at the Commerzbank-Arena helped them to a 2-0 on Thursday, which was enough to see them progress through to the semi-finals on the away goals rule.

It is the first time the Eagles have made it through to the semi-finals of a European competition since they won the UEFA Cup back in 1980 and Hutter believes his side delivered a ‘perfect’ display against a Benfica team with plenty of experience on the continent.

Hutter told his club’s official website: “It was a perfect game and a perfect evening – Benfica went all out to score but we stood up and we certainly deserved to win.

“We have delivered great performances in the Europa League. At 1-0 we had the necessary luck. Our tactical discipline was important and we absorbed the emotions of the audience.”

The Bundesliga club’s reward for reaching the last four will be a clash with Chelsea, who booked their place in the semi-finals with a 5-3 aggregate success over Slavia Prague.

Hutter feels the west Londoners will head into the tie as favoiurites, but he is hopeful his players can take advantage of their underdog status.

“We are perhaps the least anticipated semi-finalists, and Chelsea will be the favourites,” Hutter added.

The first leg of the semi-final tie will be played in Germany on May 2 and Eintracht, who are priced at 6.50 to go and win the Europa League, will be hoping to build an advantage to take into the reverse fixture at Stamford Bridge seven days later.