Maurizio Sarri keen not to put pressure on Callum Hudson-Odoi 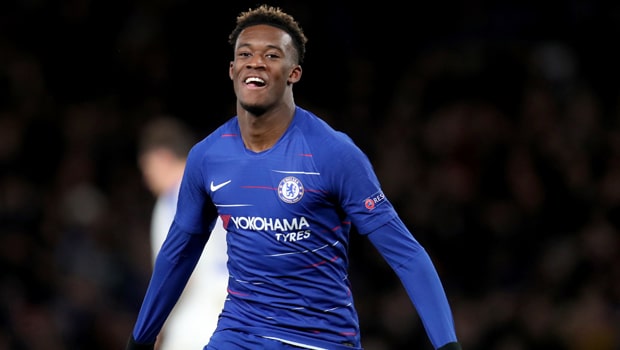 Maurizio Sarri suggests it is important not to place the burden of expectation on exciting Chelsea teenager Callum Hudson-Odoi.

Hudson-Odoi scored his third Europa League goal of the season as the Blues beat Dynamo Kiev 3-0 at Stamford Bridge to plant one foot firmly in the quarter-finals.

Pedro and Willian had given the home side a two-goal advantage and teenager Hudson-Odoi – on for the Brazilian with 12 minutes remaining – added the third in stoppage time.

The youngster has impressed this season despite limited opportunities in the first-team picture.

Chelsea fans remain very excited about Hudson-Odoi’s promise and were chanting for him to come on in the second half against Kiev. His manager however insists it is important not to pile pressure on the youngster.

“He will be ready to be at the top at 22 or 23 years. We need to improve without the media of the pressure of the media, fans the club. His training is really very good,” said Sarri.

“When you have pressure when you are 18 it is dangerous, you can lose the target. The target is to improve. So it is dangerous. This is why I don’t like to speak about him.”

For now, Sarri doesn’t expect Hudson-Odoi to be a constant in the first-team at Chelsea.

Asked if Hudson-Odoi can fulfil his promise at the club, Sarri said: “I am convinced, he doesn’t have to do anything to convince me. He is a very good player. He needs to improve. At 18 he can’t be at the top.”

Europa League winners in 2013, Chelsea are 3.60 joint-favourites to lift the trophy this season alongside Sarri’s former club Napoli.