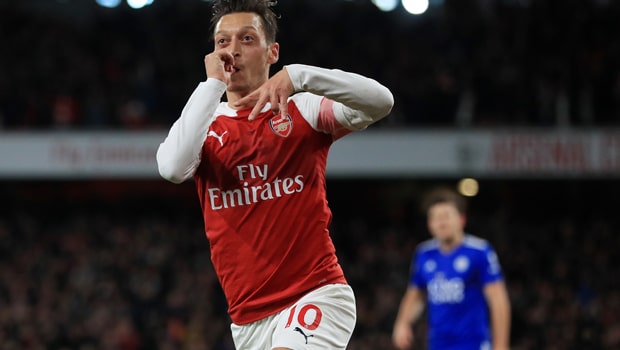 Arsenal head coach Unai Emery has insisted he will ‘demand more’ from Mesut Ozil after hailing his outstanding display in the 3-1 win over Leicester.

The German playmaker captained the Gunners from the start for the first time in his career and, after Hector Bellerin’s own goal put the Foxes ahead, Ozil levelled before half-time.

The often-maligned playmaker then paved the way for Bellerin to tee-up substitute Pierre-Emerick Aubameyang to slide Arsenal ahead before turning provider as the striker notched his brace at the end of a sumptuous team goal to cement the win.

Ozil took to social media after to declare Arsenal had played ‘sexy football’ in recording their 10th straight win in all competitions and Emery shared the joy.

The Spaniard also suggested that more could be expected, not just from Ozil, but from every Arsenal player.

“Mesut Ozil had a very good performance today. We are going to push to demand more from ourselves and from him also,” Emery said.

“In the team we have a lot of players with this capacity (to be captain) because each player can help us with their quality and capacity.”

While Ozil has not been a certain starter this season since Emery replaced Arsene Wenger, the coach has suggested that if he maintains his performance level, it will be tough to leave him out.

“We have very clear captains and each one is important, but I think he (Ozil) can play every match with his commitment and his quality,” Emery added.

“We are going to demand this commitment and behaviour from every player, and then with our quality we can help each other on the pitch.”