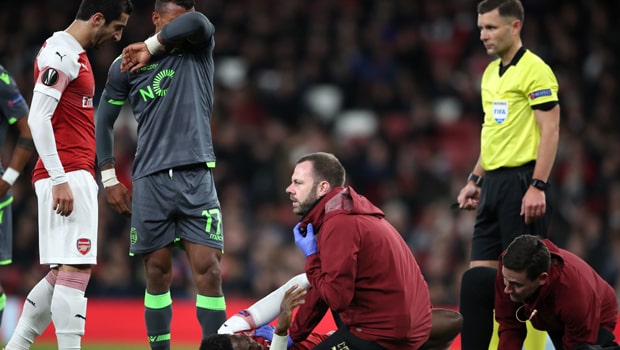 Arsenal secured progress to the last-32 of the Europa League with a scoreless draw at home to Sporting Lisbon but the evening was marred by an injury to Danny Welbeck.

The 27-year-old England international’s problem occurred when he jumped for a header and landed badly on his right ankle just before the half-hour mark.

Welbeck received oxygen and had his leg in a protective brace as he was taken off the pitch and his manager admitted fearing the worst afterwards.

“He is at the hospital. The news is that we are going to wait, but we think it’s a serious injury,” said Emery.

“Every injury is different. This could be a break of something in the ankle.

“It’s clear that we’re with him in these minutes. He’s a very good person and his commitment with us is very big. It’s a very big injury for him, for us, for all people who like and love him as a person.”

Welbeck has scored five goals this season and Emery felt that his injury may have had a knock-on effect on the game, with some of his team-mates shaken up watching him leave the field of play.

“They saw it was a big injury,” added Emery.

The result, along with a 1-0 win for Azerbaijani side Qarabag over Vorskla Poltava of Ukraine in the other Group E match, was enough to take the Gunners into the knockout stage with two games to spare, while they have now gone 15 games without defeat in all competitions.

Arsenal are 7.00 to win the Europa League this season while Chelsea, also safely through to the knockouts, are favourites at 4.75.