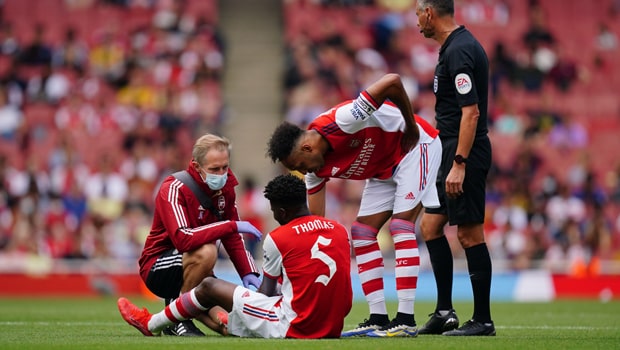 Arsenal’s season may just have started on a bad note after Ghanaian midfielder Thomas Partey picked up an ankle injury.

The former Atletico Madrid star went down under a challenge from Ruben Loftus-Cheek and was stretched off in the 2-1 loss to Chelsea in a Pre-season game.

Arsenal manager Mikel Arteta confirmed the injury scare after the game that was played at the Emirates stadium.

“At the moment it’s not looking good because he was in pain and he could not continue which, for Thomas, is pretty unusual,” said manager Mikel Arteta.

A scan will be made to ascertain the extent of the injury on his ankle while his availability for Arsenal’s Premier League opener against Brentford on August 13 is now in doubt.

Kai Havertz had given me Chelsea the lead in the first half before Granit Xhaka scored the equalizer for the Gunners minutes later.

Meanwhile, English forward Tammy Abraham, who has been linked with a move to Arsenal all summer, scored the winning goal for the Blues after an error from Hector Bellerin with less than 20 minutes to play.

The Spanish left-back has been linked with a move away from the North London club.

Arsenal’s Joe Willock hit a long-range effort that seemed to have crossed the line but was not given in the stoppage time of the game.

Arsenal has signed Ben White, Albert Sambi Lokonga, and Nuno Tavares this summer, and all three were introduced as substitutes for their home debuts.

Ben White was signed from Brighton in a £50m deal and the defender was quick to show his quality early in the second half with a goal-line clearance from Hakim Ziyech’s effort.

Arsenal’s pre-season started with a 2-1 loss to Hibernian and then followed by a 2-2 draw against Rangers and 4-1 wins against Millwall and Watford.