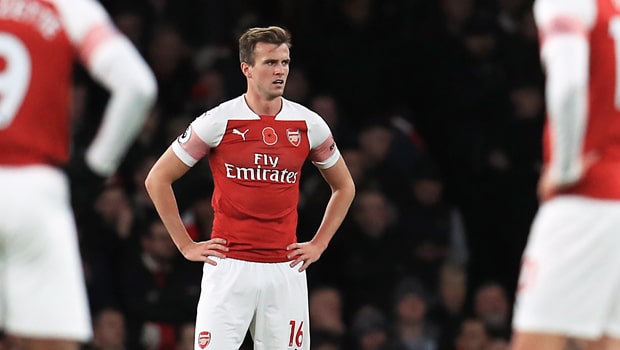 Rob Holding hopes that playing a part in Arsenal’s revival this season will bring him to Gareth Southgate’s attention.

Having played under the England boss during his time with the Under-21 squad, the 23-year-old now has ambitions of a full international call-up and says he would love to play a part in an England side that reached the World Cup semi-finals and, last week, secured a place in the finals of the Nations League.

Holding has been a regular in the Arsenal first team under new boss Unai Emery and hopes what he describes as his best run with the Gunners will have been noticed by Southgate.

He said: “Gareth Southgate has brought a refreshed feeling to England with a lot of young lads.

If you’re playing well in the Premier League week in, week out, as we saw with Callum Wilson and Lewis Dunk, you’re going to get chances.

“You want to be a part of what they are creating at the moment. Obviously what they did at the World Cup and there is the Euros in over a year’s time. It’s a great time to be involved with England so why wouldn’t you want to be.”

After the international break, Arsenal are back in action this weekend, playing Bournemouth away on Sunday as they seek to extend a 16-match unbeaten run in all competitions.

After starting the new season with defeats to Manchester City and Chelsea they have not been beaten since and lie fifth in the Premier League table – three points behind rivals Tottenham.

After missing out on a top-four place in Arsene Wenger’s final years in charge at the Emirates Stadium, the Gunners are 2.63 to secure Champions League football in Emery’s first season. Arsenal are 2.00 to win Sunday’s game with Eddie Howe’s side 3.60 and the draw is 3.60.