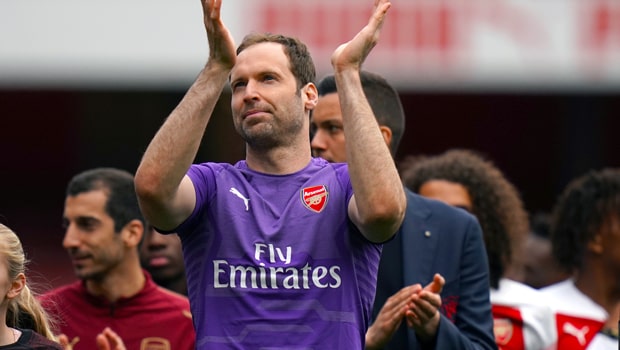 Arsenal goalkeeper Petr Cech has urged his side to get the job done against Valencia as he looks to end his career with another trophy.

The 36-year-old is retiring at the end of the campaign, but he still has work to do as he tries t help the club qualify for the Champions League.

Arsenal are fifth and look set to miss out on qualifying through the Premier League, but the Gunners can still qualify by winning the Europa League.

They won the first leg against Los Che 3-1 last week but Sunday’s 1-1 draw with Brighton has put more pressure on Unai Emery.

Cech has asked his team-mates to dig deep as they try to help the club win their first European trophy in 25 years.

He told reporters: “I wish that we could have won the [Brighton] game and finished the season at home on a high.

“We put ourselves in a good position to play until the last game of the season for a chance of the Champions League, but obviously we didn’t manage to do that, so it’s mixed feelings for me.

“I’m sad on one side because my journey here is over, but we still have hopefully three weeks to go until Baku [the Europa League final’s host city]. We need to pick ourselves up and get ready for Thursday because this is most important.

“I’ve always believed that if you work for the team and work hard, then you’ll give everything for the shirt. Hopefully I’ve done that.

“I have to say that I hope my last game will be in Baku. That would be the best thing. I want to progress to the final and lift one last trophy. I think everybody at Arsenal deserves that, so I hope we can make it.”