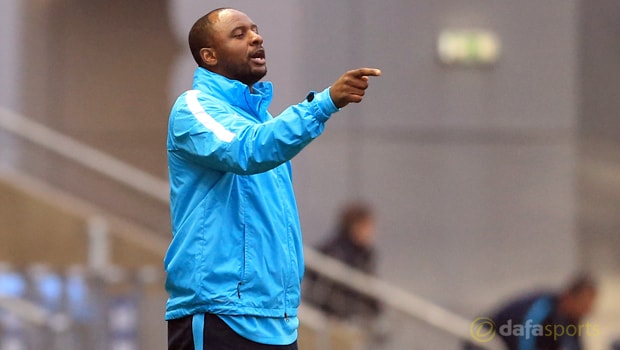 Arsene Wenger has suggested that former Arsenal captain Patrick Vieira has the ‘potential’ to come back and manage the club in the future.

The 41-year-old New York City boss has been touted in the media as a potential successor should his long-serving compatriot Wenger move aside this summer.

A mediocre league campaign which will end with Arsenal missing out on the top four for the second year running has once more led to heightened speculation over Wenger’s future.

That future could hinge on Arsenal’s ability to secure Champions League football for next season by winning the Europa League, where they meet La Liga giants Atletico Madrid in the semi-finals.

Vieira enjoyed a glittering nine-year stint at Arsenal during the peak years of his career. Arsenal signed a 20-year-old Vieira in September 1996, with the powerful midfielder later revealing he joined the club as he was aware Wenger was set to take over as manager.

He would go on to win three Premier League titles and four FA Cups, as well as captaining Wenger’s side throughout their unbeaten ‘Invincibles’ season of 2003/04.

He returned to England after a successful spell in Serie A to see out his playing days at Manchester City, where he then moved into coaching and eventually to a role as manager at another of City Football Group’s clubs, Major League Soccer franchise New York City.

Wenger is following his career closely now and says Vieira – along with some other former Arsenal stalwarts – could be a future successor at the Emirates.

“He’s a guy who has the potential one day, yes,” he said of Vieira’s managerial credentials.

“He works in the moment in New York and he works for Man City. I’ve followed his managerial career. I think he does very well. But overall, after that, this Premier League is special, you know.

“You have to come in. There are plenty of former players who played here who have potential and the intelligence and the knowledge to do it. So there’s plenty of choice, don’t worry about that.”

Arsenal are 4.00 to win the Europa League this season, with semi-final opponents Atletico favourites at 2.10 to lift the trophy.