Mesut Ozil ‘proud’ to be at Arsenal 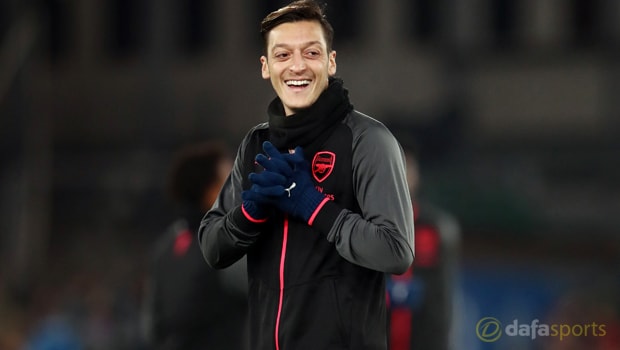 Mesut Ozil insists he’s “proud” to play for a massive club like Arsenal and feels he has become a better player since arriving from Real Madrid five years ago.

Ozil, 29, has yet to sign a contract extension and is free to talk to foreign clubs this month, with his contract at the Emirates expiring in the summer.

Arsenal’s attempts at securing his future have so far fallen on deaf ears, but Arsene Wenger remains adamant the player will not be sold in the current transfer window.

Alexis Sanchez is also out of contract this summer and the Chilean has been touted for a move to Manchester City while Ozil’s name is being linked with Manchester United and Barcelona.

But the 2014 World Cup winner says he has achieved the goals he set for himself in joining Arsenal.

“[I joined] because of the history, they had always amazing players, and because I’m here to learn, to grow up and to show my talent for this club,” the Germany international told Sky Sports.

“They have made me bigger, this club. I’m so proud to play for such a big club like Arsenal.”

Despite his failure to agree new terms with the club, Wenger still feels that Ozil could remain an Arsenal player after this summer.

“I believe he wants to stay, he is not to be convinced [to sign a new contract],” said Wenger.

“You want nobody to leave and you see where we stand on that. But, at the moment, it’s very difficult.

“Until the end of the season we know what it is, but after that I cannot tell you.” Arsenal are 6.50 to win the Europa League this season.