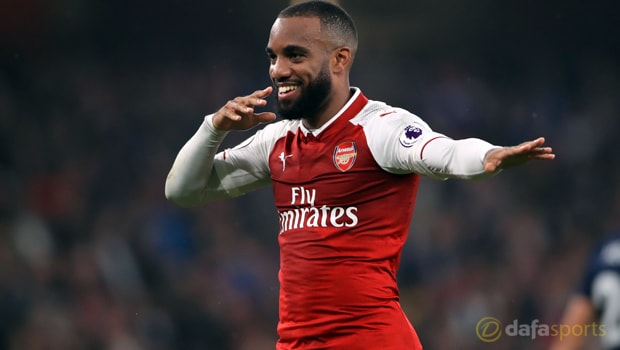 Jack Wilshere believes Arsenal team-mate Alexandre Lacazette will only continue to improve as he adapts to English football.

The Frenchman was the Gunners’ main summer signing, arriving from Lyon for close to £50m and has wasted little time in making an early impression.

Four goals in eight matches has already endeared him to the fans and at 26, he appears the perfect age to become a mainstay of Arsene Wenger’s side.

Perhaps most impressive has been Lacazette’s movement, an attribute that has clearly aided his acclimatisation and is only likely to help his burgeoning combinations with the likes of Alexis Sanchez and Mesut Ozil.

Having been away with his country, the forward is likely to start on Saturday when the Premier League resumes, with the Gunners heading to Watford.

Wilshere will also be looking to get the nod and on paper, looks like he could enjoy playing with Lacazette due to his new team-mate’s movement.

The midfielder admits he has been impressed by the forward, believing him to be the perfect man to lead the line for the club.

“Lacazette, of course [has impressed],” he told Arsenal Player.

“I think he’s gone a little bit under the radar with Morata [doing so well], but to come in from the French league to a big club in England and score four goals in his first seven or eight games [is very good].

“He’s doing well and he’s only going to get better. His movement is world class and, for a midfielder, that’s what you want from your striker.”