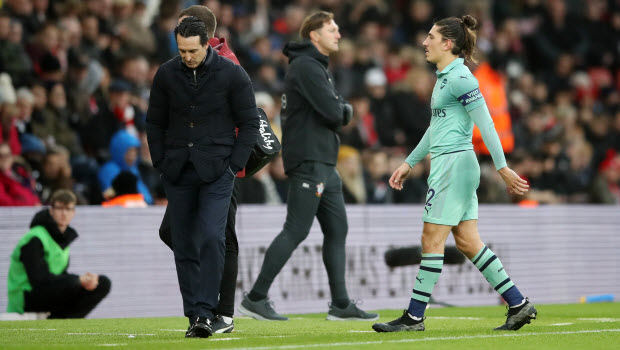 Arsenal boss Unai Emery has confirmed right-back Hector Bellerin will miss the busy Christmas period after picking up an injury on Sunday.

The Spaniard was substituted at half-time during the 3-2 defeat to Southampton at St Mary’s. Bellerin went down holding his left leg and Emery confirmed he has suffered a small injury that will now seem him miss the next few weeks.

He will miss Wednesday’s Carabao Cup clash with Tottenham as well as league games against Burnley, Brighton, Liverpool and Fulham. Emery said: “Bellerin has a small injury – he is going to be some weeks off, I think.

“Sokratis is coming back and we will see how Mustafi and Kolasinac are, and it is good news Koscielny can be with us for the next matches. It is not a good result but it was important for us [to have them back].

“We are going to wait tomorrow and Tuesday, and Wednesday we are going to play, and then Saturday also. We need every player.” Sunday’s defeat leaves Arsenal fifth in the Premier League table and Emery has also hinted at some new signings next month.

He added: “Only if we think the players can’t help us with a good performance. “January is not a good transfer window for this reason, but we are going to look and the club is working for transfers in January, but also we are in a [good] way.

“We are making progress with young players and giving them chances, and when we need to give them more chances to play and show their progress we are going to do that.”