Posted by Iniobong Umoh on September 1, 2019 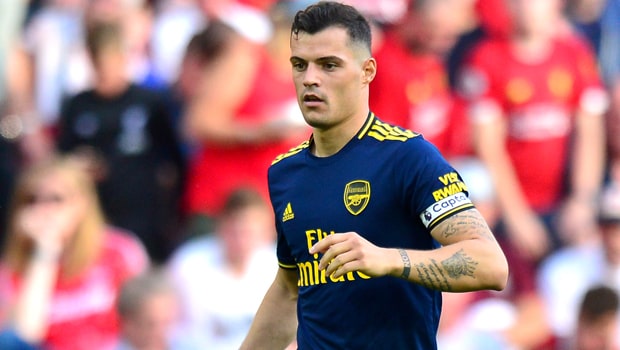 Former Manchester United captain Gary Neville took a dig at the Swiss international after the arsenal midfielder dived into a challenge on spurs Heung-Min Son in inside the penalty area minutes towards the end of the first half.

The Swiss started alongside Matteo Guendouzi and Lucas Torreira in Sunday’s draw against Tottenham at the Emirates stadium.

Christian Eriksen put Spurs ahead in the 10th minute from a close range after Arsenal goalkeeper Bernd Leno palmed the ball straight to the Dane’s path.

Alexandre Lacazette and Pierre-Emerick Aubamenyang both scored to ensure both sides shared the spoils.

However former Manchester united captain Gary Neville who was on punditry duties with Sky Sports was left unimpressed by Granit Xhaka’s performance saying “I don’t think I’ve watched a game where Xhaka’s not made a challenge like that.

“It’s absolutely ridiculous from a senior player,” before adding a cutting: “An experienced player who has never played with experience, it’s absolute madness from Xhaka. He does it week in, week out. Season after season. He doesn’t seem to learn.”

However, Gary Neville wasn’t the only one who was critical of Granit Xhaka’s performance against Tottenham, Former Liverpool captain Graeme Souness was also quick to take a dig at the Swiss international saying the midfielder has got to learn to stay on his feet especially in the box.

Arsenal boss Unai Emery, however, was quick to defend the player saying he was proud of the Swiss work-rate.

The midfielder after the game applauded the Arsenal fans for their support in the North-London derby and admitted that he made a mistake that gifted Tottenham a two-goal lead.

Granit Xhaka joined Arsenal from German side Borussia Monchengladbach and has gone on to make over 100 appearances for the Gunners. Xhaka was a member of the Swiss Under 17 team that won the 2009 FIFA Under 17 World Cup. The Swiss international made his international debut in 2011 and has earned over 70 caps with the Swiss National team.