Auba pleased to put penalty woes behind him 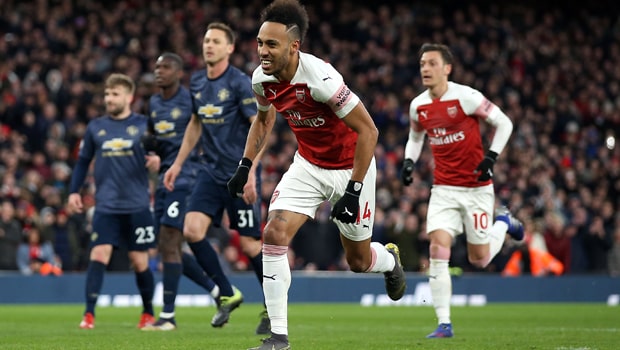 Pierre-Emerick Aubameyang felt hard work on the training pitch helped him to overcome his penalty nightmare as Arsenal defeated Manchester United 2-0 at the Emirates.

The Gunners leapfrogged their opponents to move into the top four, having handed Ole Gunnar Solskjaer his first Premier League defeat as Red Devils boss.

Granit Xhaka put the hosts ahead on 12 minutes, fooling David de Gea with a swerving shot, after Romelu Lukaku had missed a glaring chance to score for United.

Brazilian midfielder Fred struck a post for United before Aubameyang stepped up in the second half to score from 12-yards. Having missed a spot-kick to win the north London derby against Tottenham last weekend, the striker revealed he has been hard at work to ensure no repeat.

“I was confident, my teammates give me a lot of confidence. Laca [Alexander Lacazette] gave me the penalty and that was cool from him, I was really focused.

I made a mistake against Tottenham, looking down at the last moment, not watching [Hugo]Lloris, but today I watched until the end – and being focused you score a penalty,” he told Sky Sports.

The Gunners have won seven out of 10 top-flight games since the turn of the year, ensuring they are just one point behind Spurs, who sit third in the table, with eight games remaining.

Aubameyang feels they can now push on and get a top-four finish for manager Unai Emery in his first season at the helm.

“We have a good spirit, we are hungry. We want to come back into the Champions League and we’re all focused on that,” he added.