Posted by Vincent Henderson on March 5, 2018 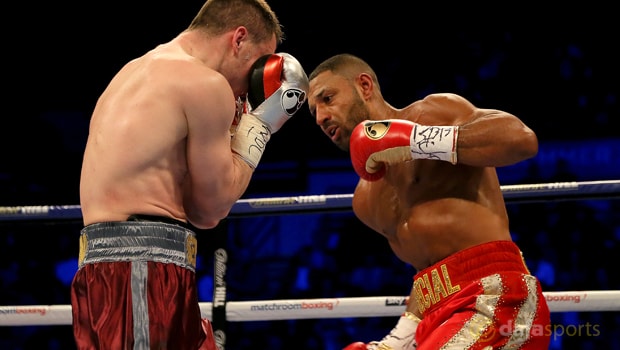 Kell Brook has set his sights on fellow Briton Amir Khan after making a winning return to action in Sheffield over the weekend.

Brook got his career back on track with a commanding performance against Belarusian Sergey Rabchenko in his hometown.

The 31-year-old, who was making his debut at super welterweight, silenced some of his doubters after successive losses to Gennady Golovkin and Errol Spence Jr.

He sent out a message as he dispatched of Rabchenko inside two rounds and he immediately turned his attention to Khan after the fight.

Brook said: “If I had the choice between fighting Khan or fighting for a world title, it’d be Khan.

“I think everybody wants to see that fight. We’re both promoted now by Eddie, so why can’t we make it happen now? “We need to sit down, talk about weight and make the fight.”

Bolton-born fighter Khan will make his return to action in April 21, having not fought since his defeat to Canelo Alvarez in May 2016, and promoter Eddie Hearn, who works with both fighters, feels the pair could be on a collision course.

Hearn said: “Of course, Amir Khan-Kell Brook is the fight we have wanted for three or four years.

“He fights on April 21 in Liverpool. Kell has passed his test and now Amir Khan has got to pass his test on April 21.

“Kell will be ringside for that. Kell wants to fight in June. That’s when he will next fight and then later in 2018 everybody wants to see Amir Khan v Kell Brook.”