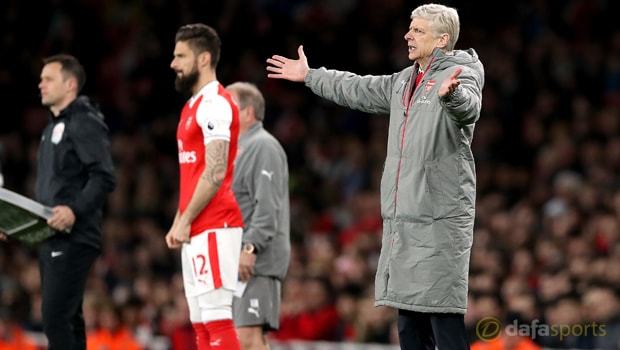 Arsenal manager Arsene Wenger has vowed to turn things around quickly after the dismal 3-0 defeat at Crystal Palace on Monday night.

Arsenal went into the clash after losing their last three Premier League away games and their hopes of qualifying for the Champions League were hanging in the balance.

The Gunners, who beat West Ham United 3-0 at the Emirates last time out, looked laboured from the very first minute and Palace took full advantage of a lacklustre display from the visitors.

Former Tottenham winger Andros Townsend opened the scoring from close range in the 17th minute before Yohan Cabaye doubled the advantage with a brilliant finish in the 63rd minute.

January arrival Luka Milivojevic then sealed all three points with his first goal for the club when finding the bottom-left corner from the penalty spot.

It was a dreadful performance from the Gunners, topped off by sections of the away support singing “you’re not fit to wear the shirt” and “Arsene Wenger, we want you out”.

Arsenal are sitting sixth in the table, seven points behind Manchester City in fourth, and Wenger’s men are now priced at 7.00 to finish in the top four this season after a fourth-straight away defeat.

But the French tactician is refusing to give up easily and insists the players will provide an instant response when they travel to relegation-threatened Middlesbrough on Monday.

“I have managed over a thousand games for Arsenal Football Club and we are not used to that and it’s a big worry. We have to respond very quickly and not accept it.”

Arsenal are the firm 1.50 favourites to pick up all three points at the Riverside, a draw is priced at 4.20 while the home side are 6.50.