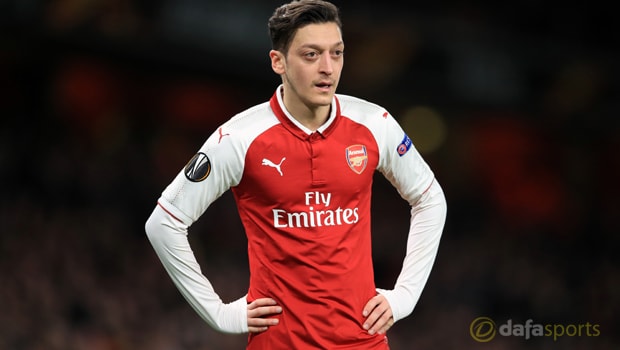 Arsene Wenger has lauded the display of Mesut Ozil during his side’s 4-1 victory over CSKA Moscow in the first leg of their Europa League quarter-final tie.

Aaron Ramsey and Alexandre Lacazette were the players that grabbed the headlines from Thursday’s clash at the Emirates Stadium, as they both scored twice, but it was Ozil, who won a penalty and laid on two assists, that really caught the eye of Wenger.

“Ozil enjoys and I hope you enjoy,” Wenger told reporters after the match.

“You see a great football player. When you love football, that’s what you want to see.”

Arsenal have now won five successive matches across all competitions, but Wenger did not just reserve praise for his own side, as he felt CSKA contributed to what was a very entertaining clash.

“It was a spectacular first half played at a high pace, but [it was] uncomfortable,” the Frenchman added.

“They were a side who are technically very good.

“We scored some great goals. At half-time, at 4-1, the target was not to concede anymore and score another. We did the first part of the job in the second half, but not the second.

“CSKA is a good team, a good technical level. They’re quick going forward and gave us problems in the first half especially.”

Arsenal are next in action when they play host to struggling Southampton in the Premier League on Sunday before they face the return clash with CSKA at the VEB Arena next Thursday.

The Gunners will be hoping to avoid any slip-ups next week and they are priced at 3.50 to not only emerge from the tie, but go all the way and win a first European trophy since 1994.